Living in a war zone where the threat of physical attack remains a very real a state of permanent emergency exists.

Since the attack was on her village a state of identity trauma  may exist as it involves attacks on a person's sense of who they are as much as a physical threat.

Escape plans, a support system and an inner strength are necessary to bring change, to break the cycle of violence. Forty years later Kim Phuc has become a U.N. Goodwill Ambassador to help victims of war but the psychological and emotional scars of her war still rage inside her.

"Photography is a reality so subtle that it becomes more real than reality." - Alfred Stieglitz, Photographer

Some wars go on behind closed doors. The constant stress of anticipating violence creates a state of paranoia similar to victims of domestic violence (DV).

With DV the enemy can be a spouse, boyfriend or relative who creates a cycle of violence not unlike what innocent victims experience in war.

Both facilitate a sensation of vulnerability; exacerbated alertness, loss of control and an altered sense of reality making it impossible to objectively validate one's own experiences or knowledge.

Forgetting the events through   psychogenic amnesia, or disassociationare defenses against feeling anything at all.

Untreated, these emotions foster a sense of being different from other human beings with a different system of meanings, isolation and a preoccupation with revenge.

For her, each time she looks at the scars on her arms she would think, "I will be ugly and I'm not normal anymore. People will see me in a different way."

Her rage peaked as she says she was dubbed the "napalm girl" and used as propaganda by the Communist regime.

Sadly, she is destined to relive her fears over- and-over in her mind throughout her lifetime through the symptoms of post traumatic stress disorder (PTSD) 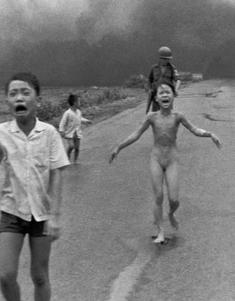 The Psychology of PTSD

The Pulitzer Prize winning photo (Nick Ut, AP) of Kim Phuc, running naked and scared from a misdirected aerial napalm attack on her Vietnamese village on June 8, 1972 emerged as one of the most powerful images of the horrors of war.  This image was shot at exactly the right place at the right time enabling it to help end one of the most divisive wars in American history.

The girl will always be 9 years old and wailing "Too hot! Too hot. Ka-boom! Ba-Boom! The ground rocked, then the heat of a hundred furnaces exploded as orange flames spit in all directions."

The photo would always be both her savior and her curse in life. The physical and psychological scars live on long after that day.

​"I wished I died at that time so I won't suffer like that anymore. It was so hard for me to carry all that burden with that hatred, with that anger and bitterness."

For a child of her age the aftermath of such an experience can reignite the horrific images of that fatal day in her mind.