"While there is perhaps a province in which the photograph can tell us nothing more than what we see with our own eyes, there is another in which it proves to us how little our eyes permit us to see."

Their emotions and thoughts are filled with anxiety, doubting their own future, doubting planning a family, doubting the future of human society and doubting the meaning of the existing world since a nuclear bomb exploding would surely  destroy everything.

It’s a sudden and absolute shift from a normal existence to an overwhelming encounter with death.

Satisfying the basic elements of life described in Maslow’s Hierarchy of Needs such as:

(1)  Physiological - involving the essentials of life including breathing, food, water and sleep;

This image triggers thoughts our own mortality which remains as a reminder of how fragile life truly is. "My God what have we done."
- John Lewis - Co-Pilot, Enola Gay

(2) Safety - involving security of the body, the family and health; (3) Love - involving friendships, family; (4) Esteem – involving self-esteem, confidence, respect of and by others.
(5) Self-actualization – involving morality, creativity, acceptance of facts.  All would fall by the wayside in the face of merely surviving a atomic blast.

How do you deal with such a thought?  Systematic desensitization occurs by seeing wars fought on TV and nuclear explosions in movies. Hope and despair and the reality that life can be snuffed out in an instant, or their health destroyed along with all they cherish are real.

A nuclear strategy requires a genocidal mentality. This consists of a dissociative processes of the mind such as “psychic numbing”, the “language of non-feeling allowing people to remain sane whilst carrying out insane policies.

Governments have to psychologically prepare their populations by demonizing the enemy to justify killing millions within minutes in retaliation for something their government may or may not have done through propaganda campaigns.

The Psychology of Human Needs

"There was a flash from the indoor wires as if lightening had struck. I didn't hear any sound; the world around me turned bright white and I was momentarily blinded. Immediately after that the blast came."  -Hiroshima Survivor

The day normal time stopped and nuclear time began was when the first atom bomb was dropped on Japan. This Pulitzer Prize Winning photo (Nancy Warner) predicted the world’s future.

Since that fatal day the image of nuclear wars have been etched into our collective consciousness. The younger generation is most affected as their emotions affect self-image filling them with doubts about who they are and about what they will become.

With the threat of nuclear war normal questions boggle the mind. Will they find a job, get married, and raise children? Will they have a life at all?

When “living under the mushroom cloud” enters the picture, doubts associated with growing up and living a normal life seem unimportant. 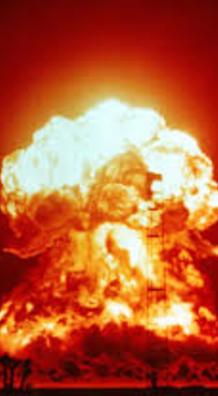