Talk to your kids about terrorism. The benefits from this tragedy appear as your increased kindness toward others, greater religious and political engagement and thinking about your priorities in life and their meaning. "Life is fleeting, impermanent and uncertain. Therefore, we must make use of every moment and nurture it with affection, tenderness, beauty, creativity, and laughter."  - Deepak Chopra, M.D.

“Photographers deal in things which are continually vanishing and when they have vanished there is no contrivance on earth which can make them come back again.”

PTSD was felt by many. The photo is also a reminder that if you can imagine the person you lost they never really die.

It stays in your mind like a mental double, a kind of psychological burial. The morning process never ends and is shared by the world.

Morning is what society does to deal with the mental double of lost things.

With loss there are five stages of grief, which include:  (1) Denial and Isolation - the immediate shock of the attack brings overwhelming emotions to the surface. To protect ourselves denial appears to buffer the immediate pain. (2) Anger - where the intense emotional pain is deflected from our vulnerable core and redirected as in wanting to counterattack. (3) Bargaining - where feelings of helplessness and vulnerability emerge for not being able to stop the attack and asking our higher power to postpone the inevitable from happening again. (4) Depression - as a reaction to the loss it brings feelings of sadness and regret.

The next part of depression is our quiet preparation to separate and to bid our loved ones farewell but still keeping them in our thoughts.

( 5) Acceptance - death may be sudden and unexpected as was the case with the surprise attacks or we may never see beyond our anger or denial. This phase is marked by withdrawal and calm.

Coping with loss is a deeply personal and singular experience. Find others who can comfort you or you them through this process.

We build monuments of etched marble and metal adorned with flags to put unfinished pieces of our mourning to rest.

Only your personal resilience and that of a strong determined people could allow the emotions of this event to fade into the perceived safety of everyday living but the emotions and images are always there.  Adversity takes its toll but can also be an opportunity for you to grow.

The Psychology of Grief

We all lost something on September 11, 2001. This powerful Pulitzer Prize Winning photo (Ruth Fremson, NY Times) evokes a gambit of emotions in the hearts and minds of people around the world. For many a corrosive combination of two emotions appeared.  Both anger and shame emerged as humiliation.

Anger is the response to a perceived insult and failure to live up to our own values. After 9/11 Americans were angry with those who attacked us and we were also ashamed that we could not regain our honor by obliterating al Qaeda the same day. 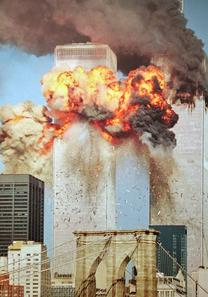